Halong Bay, located in the Gulf of Tonkin, within Quang Ninh Province, in the northeast of Vietnam, is165 km from the capital of Ha Noi. Covering an area of 43,400 ha and including over 1600 islands and islets, most of which are uninhabitated and unaffected by humans, it forms a spectacular seascape of limestone pillars and is an ideal model of a mature Karst landscape developed during a warm and wet tropical climate. The property’s exceptional scenic beauty is complemented by its great biological interest.

The outstanding value of the property is centered around the drowned limestone karst landforms, displaying spectacular pillars with a variety of coastal erosional features such as arches and caves which form a majestic natural scenery. The repeated regression and transgression of the sea on the limestone karst over geological time has produced a mature landscape of clusters of conical peaks and isolated towers which were modified by sea invasion, adding an extra elemant to the process of lateral undercutting of the limstone towers and islands. 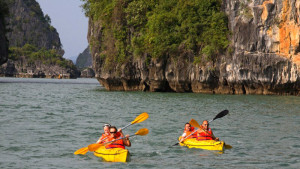 Geological structure, Halong Bay is a complex of convex complexes, with the oldest formation is the upper Ocdovic – Lower Silua sediments (belonging to the Great Paleozoic, the period of the East Sea is also a large continent) on the area. Co To Island. This sediment is an interstitial rhythmic system of terrigenous rocks and volcanic rock fragments. In this deposit there are many stone fossils, which characterize the deep sea environment. Lower-Middle Devonian sediment (after Silo) is distributed in Tra Ban, Ngoc Vung and Van Canh islands, containing boulders, coral reefs, lilies, etc. These are indicative species for the shallow coastal environment. In addition, there are coal deposits distributed in the area from Cai Bau island to Pha Lai; Neogene, Paleogene (Early Tan Sonic, Formation of the South China Sea) is distributed in the area of ​​Hoanh Bo, Cua Luc, which contains plant fossils and two-piece mollusks. The development of Halong Bay’s geology over time.

Quaternary formations present in the Hạ Long area include Upper Pleistocene deposits and Holoxen deposits (belonging to the period of the formation of Halong Bay). In it, Pleitoxene is a complex of marine, river-marine and alluvion sediments (sediments); Holocene sediments consist of marine sediments deposited on seagrass beds, sand dunes and many islands. Holoxene deposits covered the bottom of Halong Bay including large powders, small sludge and clay-powder mud. If according to the rules of a pool is accumulating as deep down, the smallest deposits in Ha Long Bay, the rule is the opposite. That said, Gulf basins were built up in the past. According to scientists, it is an interesting phenomenon when studying the bottom of Halong Bay.

About the geomorphological values ​​of Halong Bay, according to scientists, people pay attention to the beautiful beauty of the rocks and the magic of the cave, but geologically not only so Halong Bay is beautiful and beautiful first of all in the picture of rhythmic transition of the continental part of the island (or bay). If you stand on the headland, you can admire the spectacular landscape. The coastal mountains from Cam Pha to Cai Dam undulating, successive like a huge dragon is lowering the Gulf. Beside the diversity of the islands, Ha Long is also attractive by its color mosaic: on the blue background of sea water emerges the green patches of broadleaf forest on the shale islands. with the blue of vegetation on the limestone island. 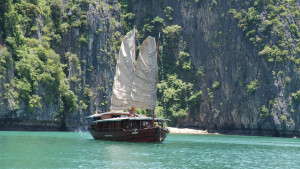 The second value of the geomorphology of Ha Long Bay is the diversity of topographic features: mountainous islands intermingled with deep sea lands, the contrast of the coastal swamp forests and the limestone islands with raised walls . This is the oldest form of geomorphology observed in Vietnam. In the continental part and the islands, erosion erosion occurs in mountainous terrains, mountains and limestone islands, in caves of different levels. At the bottom of the Gulf, the old river branches, the remaining karst blocks, and especially the karst fields flooded.

The third aspect of geomorphological value is the diversity of the formation and morphology of the cave system and the rock island. Halong Bay has two types of caves, caves and caves. The process of forming a youth cave system involves the partial relocation of “cave grottos” that fill ancient caves (such as the cave Cave of Dong Tien). The continuous erosion of seawater in the semi-arid plains of the ancient kasrt has formed the island of limestone-shaped columns and other oddly shaped islands as we see today.