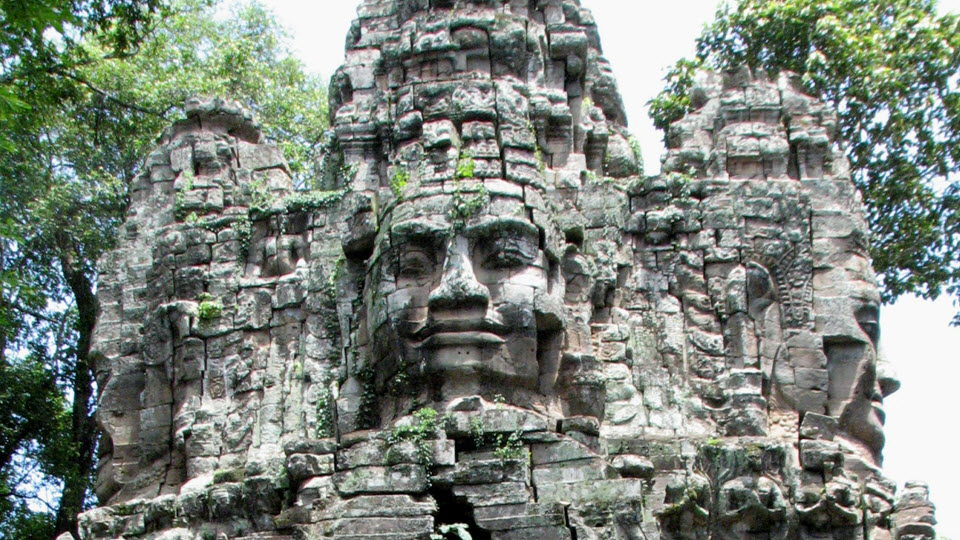 Arriving in Siem Reap, we are brought to hotel for check in. We have lunch at a local restaurant before heading to the incomparable Angkor Wat tour. We visit the South Gate of Angkor Thom, Angkor Thom means “the great city” in Khmer. The 12th-century royal Buddhist city is especially famed for its grand Bayon temple. Then, we keep on to the Terraces of Elephants, the Terrace of the Leper King, and the 10th C temple of Phimeanakas.

We then hike to the top of the 9th C Hindu temple Phnom Bakheng to view the sun set over Angkor Wat – a glorious sight!. We dine at a local restaurant and stay overnight in Siem Reap.

After breakfast at the hotel, we visit the famed Ta Prohm temple, whose structure is encased by the roots of gigantic fig trees. Unlike most of the temples of Angkor, Ta Prohm has been largely left to the clutches of the living jungle. With its dynamic interaction between nature and man-made art, this atmospheric temple is a favorite feel like Indiana Jones or Lara Croft (which was filmed here).
Following lunch at local restaurant. In the afternoon, we go for an extensive of Angkor Wat tour.  Angkor Wat was originally founded as a Hindu temple for the Khmer Empire, gradually transforming into a Buddhist temple toward the end of the 12th century. It was built by the Khmer King Suryavarman II in the early 12th century. Angkor Wat was dedicated to Vishnu. The temple is at the top of the high classical style of Khmer architecture. It has become a symbol of Cambodia, appearing on its national flag.
Following dinner at local restaurant, we will overnight at a hotel.

After breakfast at the hotel, we travel 32km to the 9th C Banteay Srei, the “Citadel of Women”, which was the last of Cambodia’s major Khmer temples to be re-“discovered”. Intricately carved, it contains some of the most detailed and finest bas-reliefs in Cambodia. We will then head to the well-maintained Banteay Samre, a 12th C Hindu temple. Following lunch at local restaurant, we will traverse the smaller temple circuit – including Presat Kravan, Sras Srang, Banteay Kdei and Takeo. We will dine at a local restaurant before retiring for the night.

Breakfast at our hotel is followed by free time for shopping. We then check out and head to the airport to catch your flight.

Not included: Insurance, visa fee (paid on arrival in Cambodia), personal expenses (such as phone, fax, and laundry), flights and airport taxes. 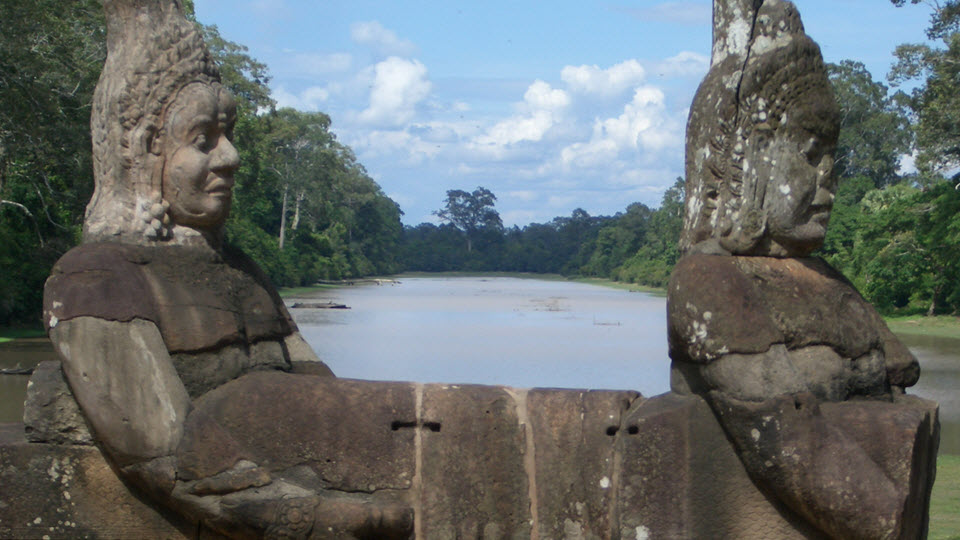 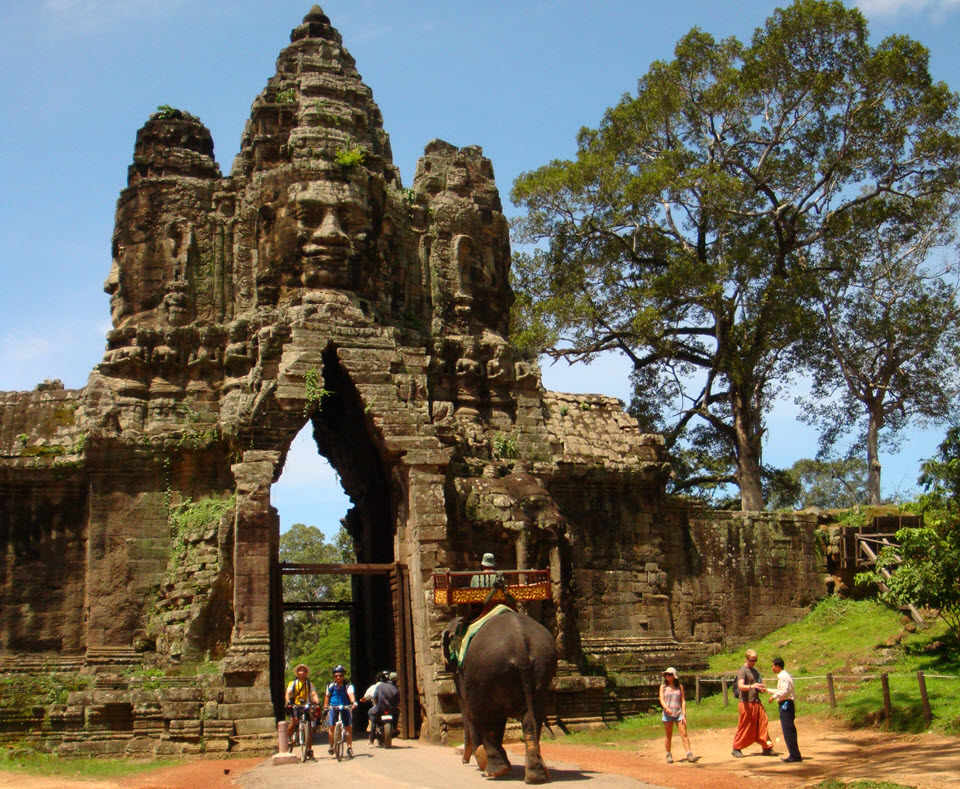 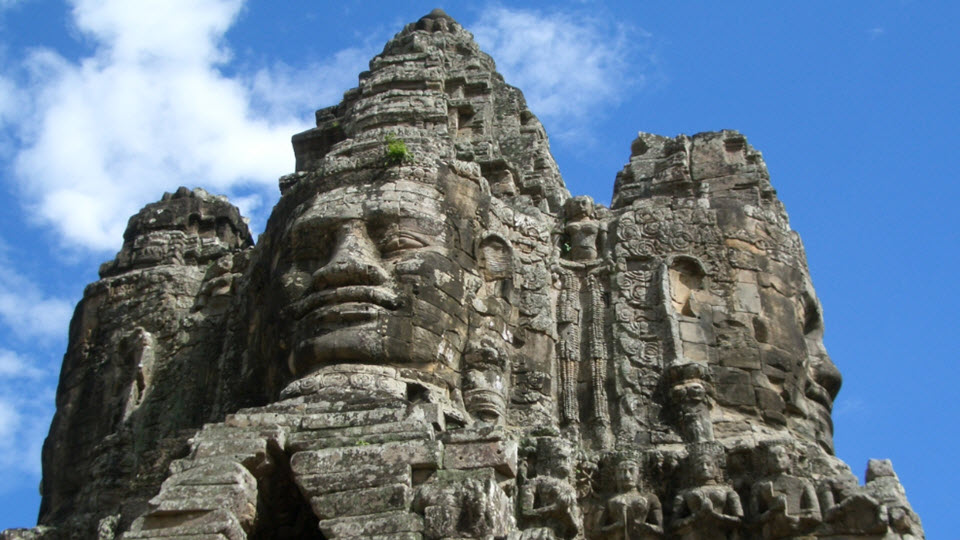 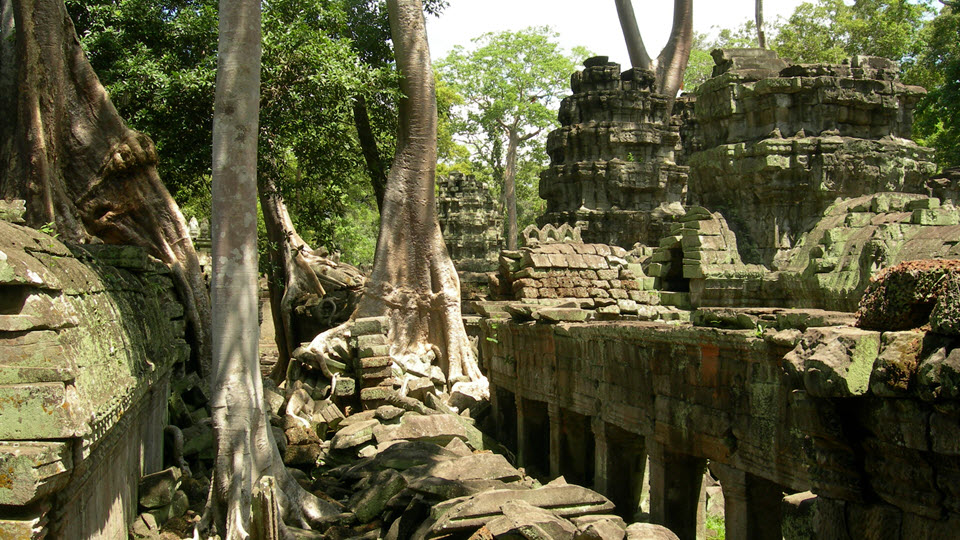 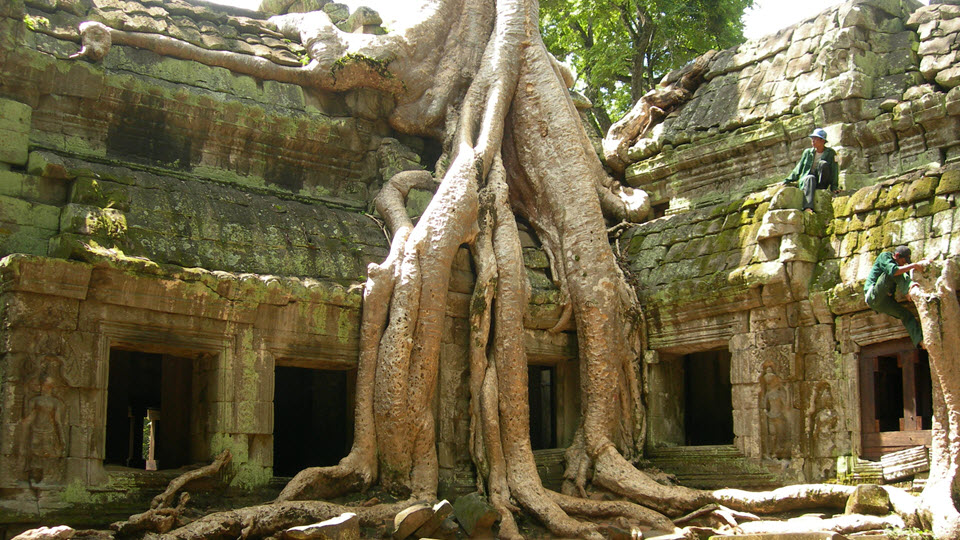 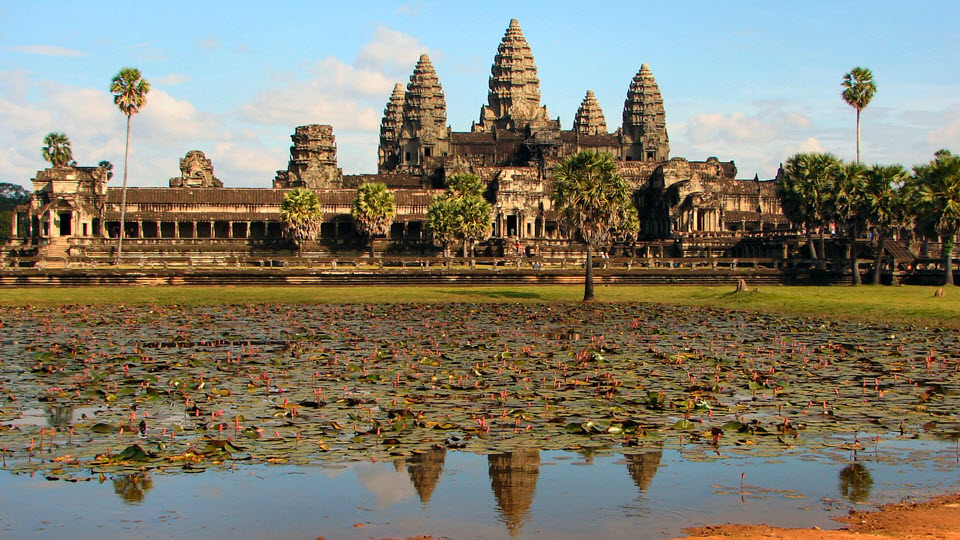 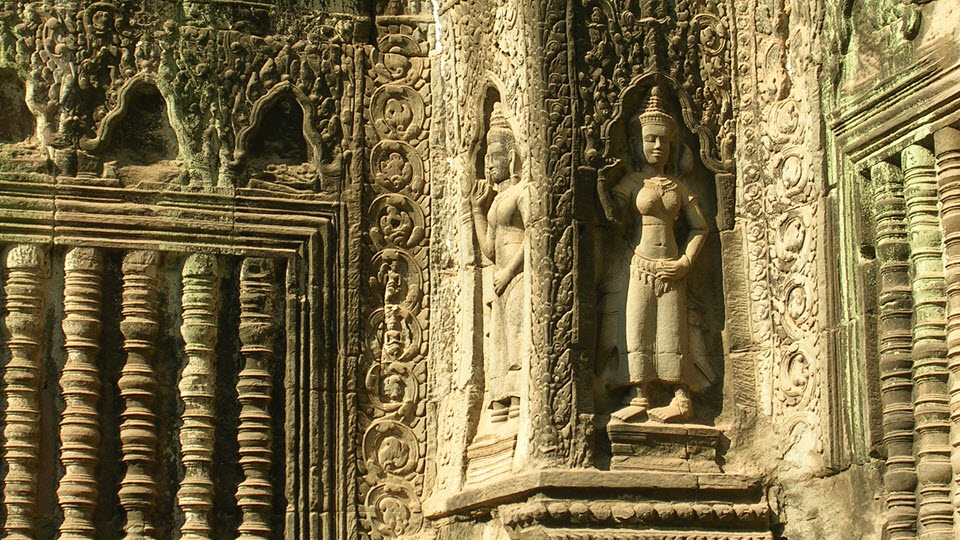 Apsaras at the uppermost level of Angkor Wat 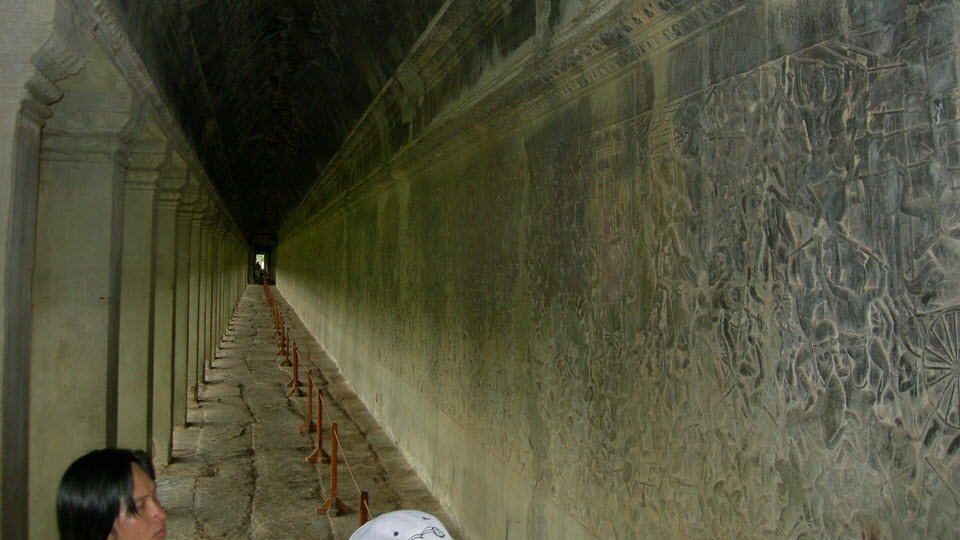 The bas reliefs in the gallery o Angkor Wat 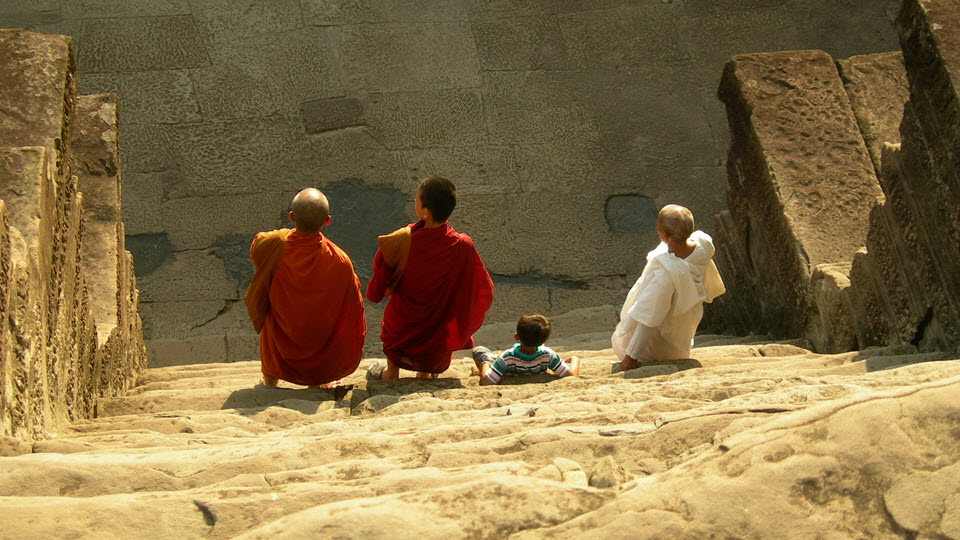 Monks at the upper level of Angkor Wat 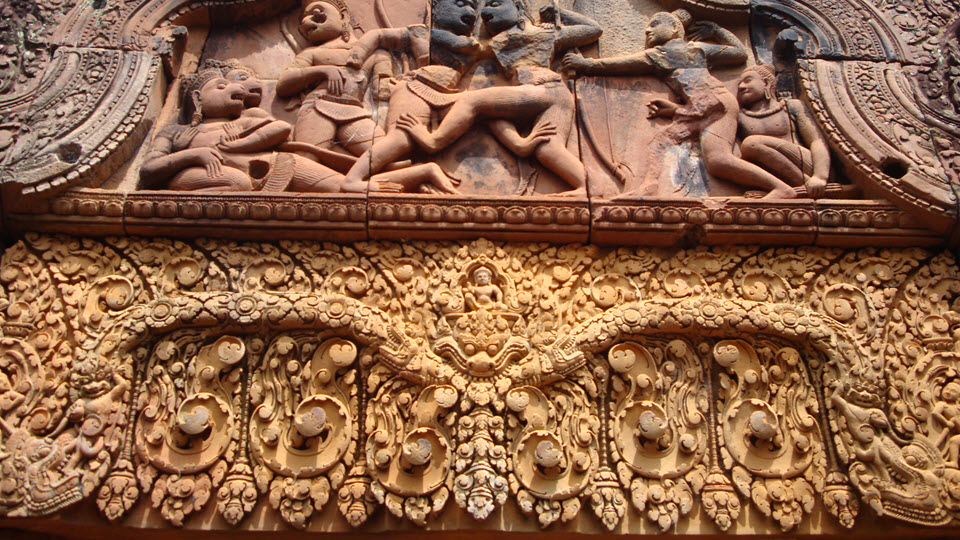 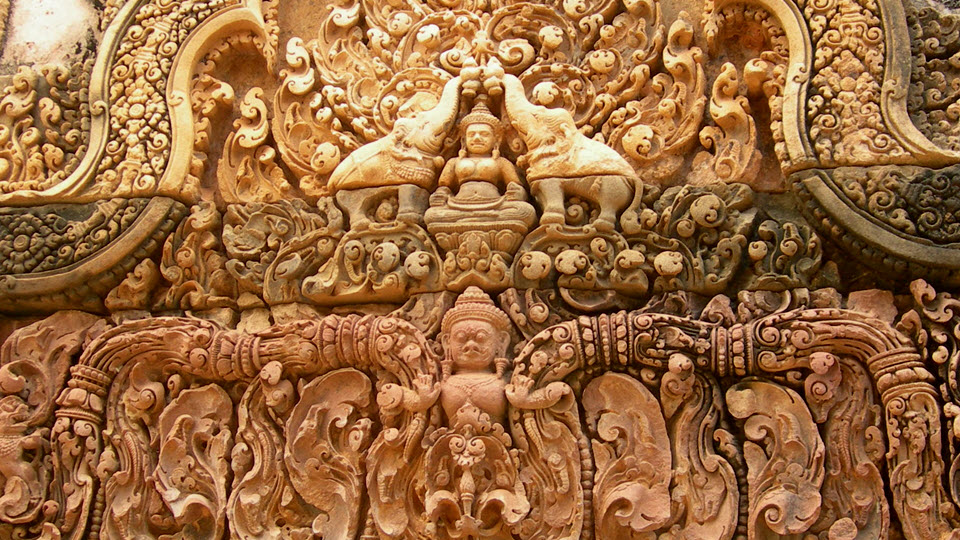