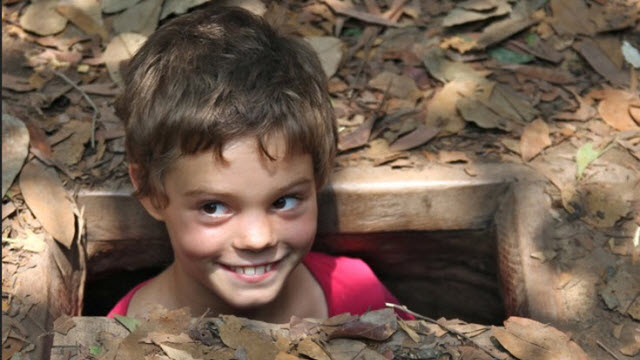 The whole trip takes about 5hours, and you can start at your own most appropriate time before 1:00 PM

You will have the opportunity to experience what life was like for the Vietcong guerrillas who lived and fought underground during the war with the Americans and the South Vietnamese. You will be able to crawl through 50 m (150 ft.) out of the some 200 km of tunnels which run under the Cu Chi area’s underground complex.

The Cu Chi tunnels were like underground cities. Do you know why? When you tour through the tunnels, you will find sleeping quarters, kitchens, meeting rooms, hospitals and schools. You can experience how difficult the life of the guerrilla fighters was! A fascinating trip across Cu Chi will give you the option to learn about the hardships Vietnamese used to experience and the stunning creativity with which these people sustained their lives in these tunnels.

We will also visit a rice paper workshop where handmade paper is made. On the route, you will enjoy spectacular scenic vistas, including eye-popping views of our rice paddy fields which stretch off from the road as far as the eye can see.

Working and living rooms of CuChi guerrillas were made of wood. Roof were covered by TrungQuan leaves – Ancistrocladus tectorius. 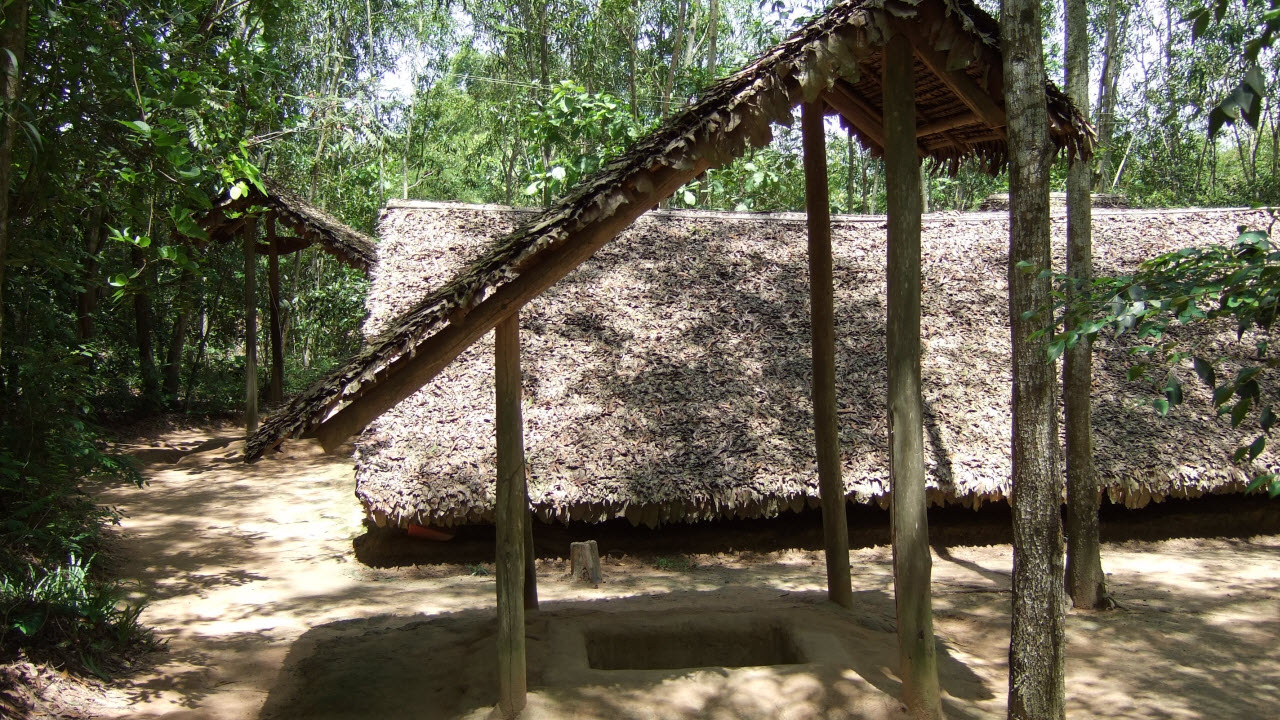 TrungQuan plant is belonging family of Ancistrocladaceae grow throughout the forests of Indochina, also met in China and India. Grows wild in the mountainous region around the country as Dong Nai, Binh Duong, Binh Phuoc, Ba Ria Vung Tau. It frequently grows on the edge of the evergreen forests, flowering season from March to May.
CuChi guerrillas used Trung Quan leaves for roofing because the leaves of this plant are fire resistant (refractory) should be used very good roofing. And the whole plant used to cure back pain, and for women of childbearing to recover health.
Life in the tunnels:  For the Viet Cong, life in the tunnels was difficult. Air, food and water were scarce and the tunnels were infested with ants, poisonous centipedes, scorpions, spiders and vermin. Most of the time, soldiers would spend the day in the tunnels working or resting and come out only at night to scavenge for supplies, tend their crops, or engage the enemy in battle. 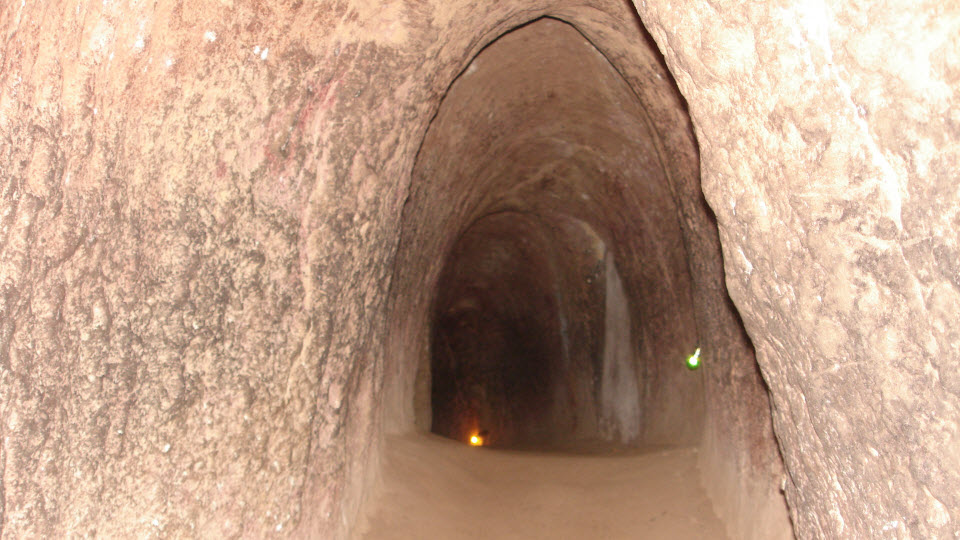 CuChi tunnels tour – inside the tunnel

During periods of heavy bombing or American troop movement, they would be forced to remain underground for many days at a time. Malaria was the second largest cause of death next to battle wounds. 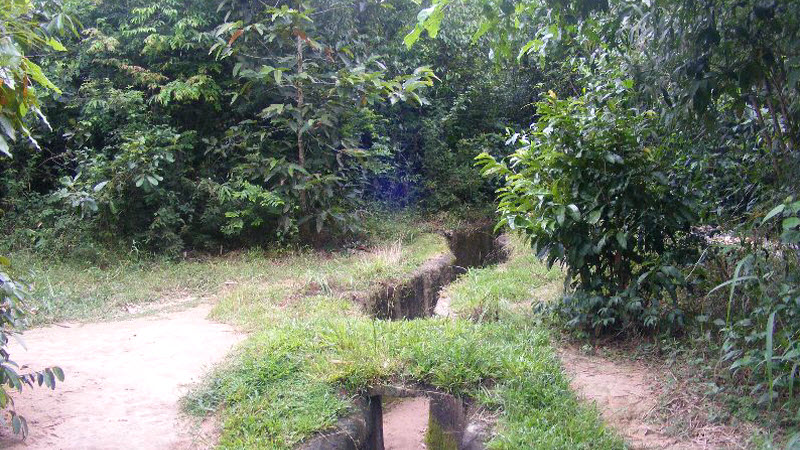 Besides tunnels construction, the guerrillas have to dig a communication trench around their strong holds. 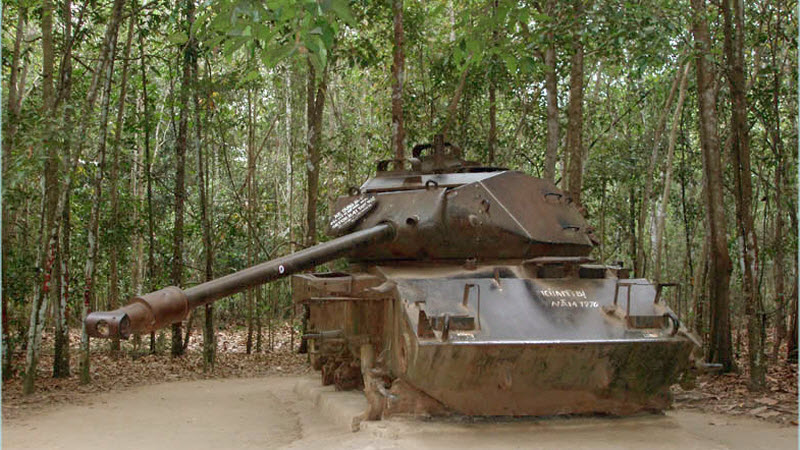 M41 military tank was attacked by VC delayed mine in 1970 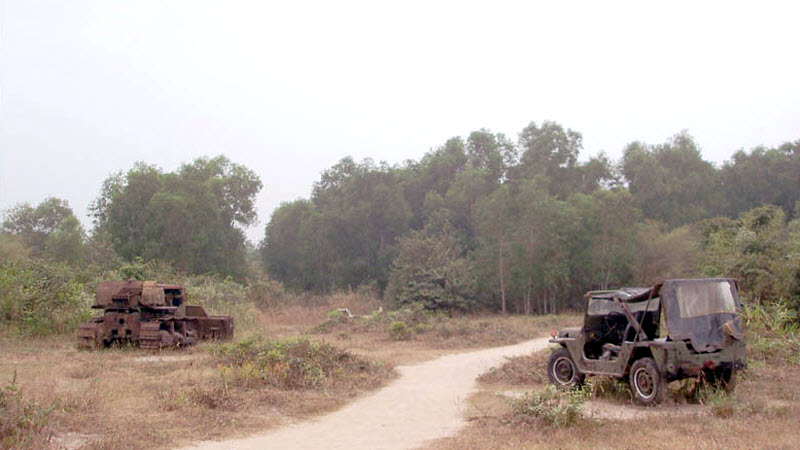 Military jeep and tank remain at the battlefield

CuChi at the present time. Ending the war, the whole district of CuChi has 13 communes heroes, 28 heroic armed forces, 715 mothers Vietnam heroes, and 1,800 valiant herois soldiers. But behind her medals, Cu Chi lost 10,000 boys and girls at their age of youth.

Ben Duoc Temple named 44 357 heroes and martyrs in the country was sacrificed on this battlefield. Getting to CuChi cemetery of martyrs in the twilight afternoon, you may feel it is very peaceful cemetery as a park. To the north of this cemetery  is the Ben Duoc tunnels relics. The south is the Ben Dinh tunnels. In front is the Saigon River and across the Ben Cat (Binh Duong province). Where the heroes lay down is the focus of fierce battle in the war – the Iron Triangle.